And than we were back! It got pretty crazy for a while. Packing things off sailing vessel Alsager, piling it up inside our 46″ Bertram live-aboard Yacht. The Captain prepared the sailboat to get onto a mooring. 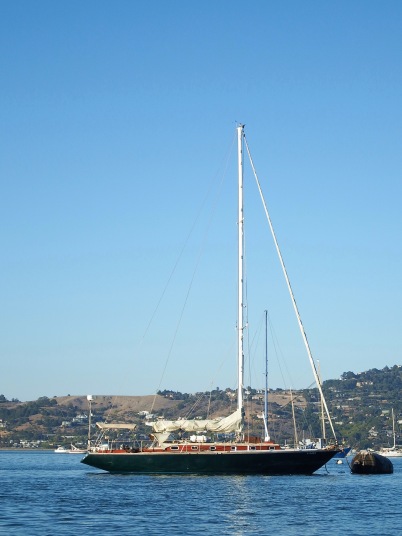 He will write his perspective soon. I took care of a lot that had to be done on the power boat. Two months prior we had already done a lot of cleaning on the power boat, but there was still plenty to do.

We had our vehicles in non operational status and had to get one going for now. Smog check, registration, insurance, oil change, that alone was almost $ 1000.- for just one car. Our savings were slowly eaten up.

The past two months had been the most expensive, beside the haul out in Mexico. The Baja Bash with two crew, far away from ideal weather and lots of motoring involved, rental cars and flights to Germany and back during high season. Let’s say, I started worrying a bit and the Captain also wasn’t at ease.

Just a few days after our return, the Captain had picked up on a job already! I was looking into preschool options, so I could also get back into the working world. Our visit to the loft of North Sails for a Sail repair before going on our adventure, had never left my mind. My idea was to learn how to sew. I started writing letters to Sail and Canvas repair shops, after I had found an awesome drop-in daycare for Mats. I received quick responses and was invited to North Sails and also to Canvas Works. They were super nice, but for both it wasn’t good timing, winter coming and no need for staff at that time. Plus, well, I did not know how to sew. They wanted to have a resume for there records anyways, which I didn’t have, the last one I had written in German language like about a hundred years ago. So, that needed to be done and took a toll on me. Finally with help from my good friend Miri and 2nd proof reading from the Captain, I got one together. I actually have quite a bit to offer. Just not, what I was into much anymore. Or ever?

A good friend of ours, Brian from Calikites offered his help to show me his industrial sewing machine. It seemed easy how HE handled the machine and I managed to patch a jacket and sew a logo on it after just 2 hours. I felt hopeful and very excited! We thought, between repairs once a while at Calikites and possibly a future part-time position at a Sail or Canvas Business, I could have something cool going for me. 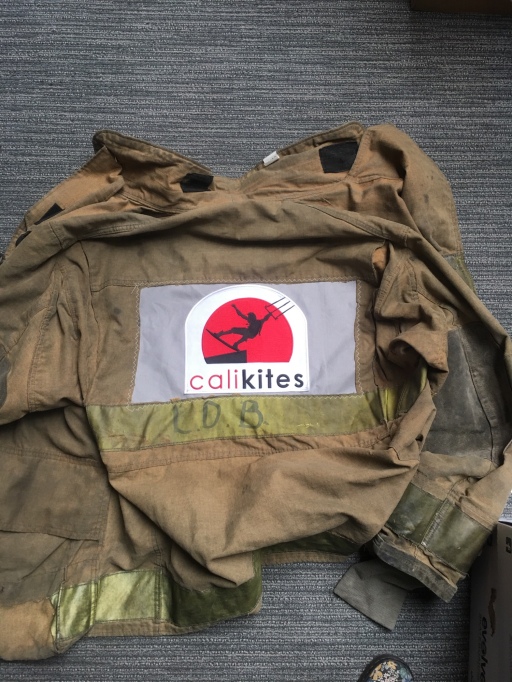 The next day I went into his shop by myself to practice. It did not go well. I looked at all the photo’s and videos I had taken on the day with Brian, but I could not figure out, what was wrong. It was frustrating and after 2 1/2 hours of nonsense, I drove home. Since I did not make any cash practicing, this little experience alone had just cost me $40,-, daycare, bridge toll and gas.

Brian went to the shop about 6 days later and checked the machine. I had just missed some tiny thing. I really wanted to learn, but it was hard not having someone around to ask, while I was there practicing. At this point we haven’t been able to make it work since we are both so busy.

Just around that time, I ran into my friend Tracy. We were still settling back in and hadn’t seen many of our friends just yet. When I asked her, so, what’s new with you? She responded, well, I quit my job and I am walking dogs right now. My chin dropped and I looked at the Captain, who immediately said: “You can do that, you could start your own business”. I got curious and started asking her many questions.

A day later, I had set up a flyer “your neighborhood dog walker”. Just like that. A bit naive. Got it printed and attached it to Bulletin boards in Sausalito and Mill Valley. 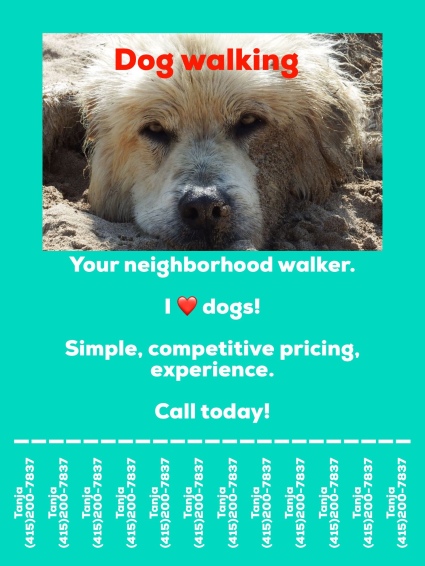 And I setup a Rover profile, which is an online App, where people can book pet sitters etc. But until the background check went through and the profile got approved, again, it took some time. I also started a craigslist posting offering the service. The Captain brought up the idea of putting stickers onto my car and I started thinking about it and designing. A name had to be found, an Email setup. Trying around on gmail to find a name, gmail approved of simplydogwalk@gmail.com  There was my name: Simply Dog Walk.

I chatted with Tracy to get a little feedback about the dog walking. She offered to ask  Buckydog‘s owner for me if they needed someone.

A couple days later I got my first call from the Craigslist post! Lucy, a Chihuahua. She was explained to me as an older lady, which could get cranky to strangers. We set up a meet and greet.

The same day Buckydog called and welcomed me to there Team! The timing was right this time, they needed a new walker.

I will write some more about this new adventure on my new website: