After my nephews birthday, we drove to the place I was raised – Enger.

I took a break of taking photo’s and just dived into a world of memories, basically lived in the attic for days just sorting threw things of my past. My dear Mom meanwhile kept Mats busy and those two became very close.

Even though going through things I had postponed on short visits over the past 18 years was a lot of work and also hot up in the attic , it was enjoyable and I had the feeling that I had found myself. Reading old letters, realizing, I hadn’t changed and still acted certain ways 30 years later. Gosh, did I never grow up?

My uncle stopped by, he is a great character. Photography, biking, meditation, he is a Pro in all and much more. It was a pleasure watching him tune a strider bike, I had just scored for 5 Euros at a flea market for Mats. He also gave me helpful advise on using my camera and I am thankful for that. Maybe I am going to pick up some meditation because I like his mellow and thoughtful approach. I wish I had more of that in me. It’s always fun and entertaining being around him. 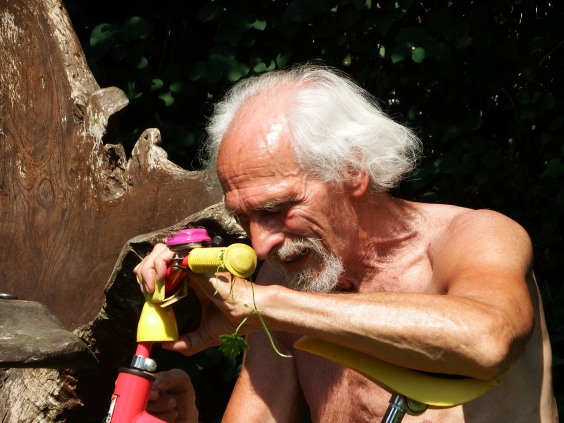 I was able to see friends I grew up with and who know me just too well. They don’t hesitate to ask the right questions (Inamaus) and you catch yourself pooring out words which were held inside for way too long and one or two tears came along with them.

A week later, the Captain had made his way to Enger as well. Still much in my thoughts about my life than and how it is now, he entered into the world of my childhood with a jetlag and the stress which came from the strenuous boat passage from Cabo to Los Angeles with a weather window, which was less than perfect. You can read about the interesting passage in the previous post!

It took a while for us to get used to each other again. My Mom’s 75th Birthday arrived and my brother visited from cologne with the family. We had a super fun time at a Spa with the coolest water slide I have ever experienced. In the afternoon my Mom had reserved some seats for us to watch another German World Cup match at a Beer Garden (Jever Deel). It was crowded and we were not able to see well, but nice to be in a crowd and with each other. And also running into childhood friends. 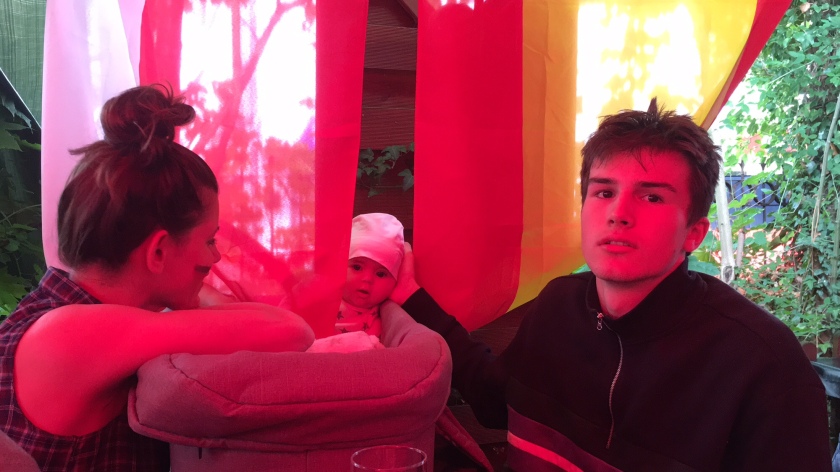 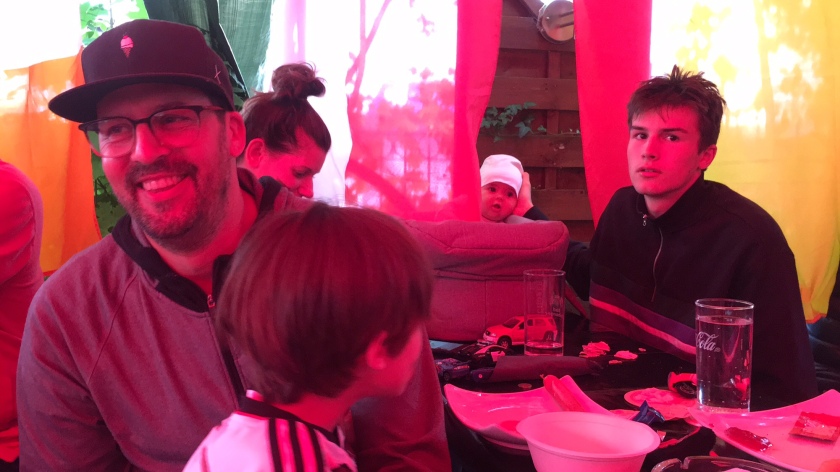 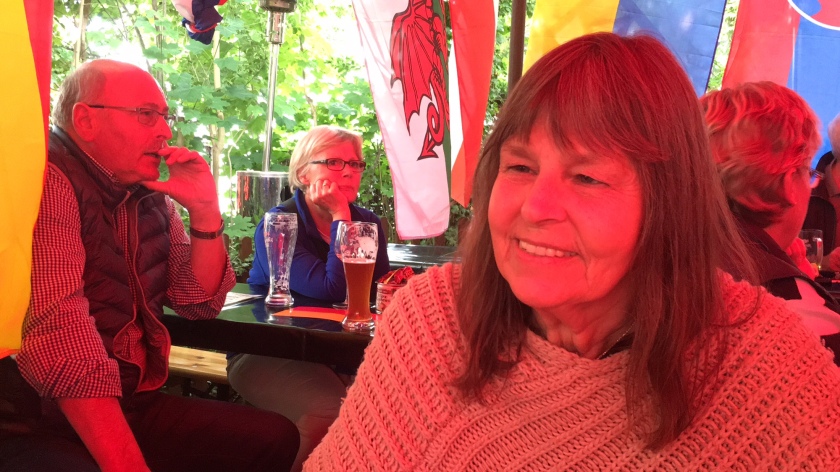 After the match (again lost on the German front) we went for an ice cream at the legendary “Degrassi ” Italien ice cream Place in Enger, before we had to see my brother and his family off. 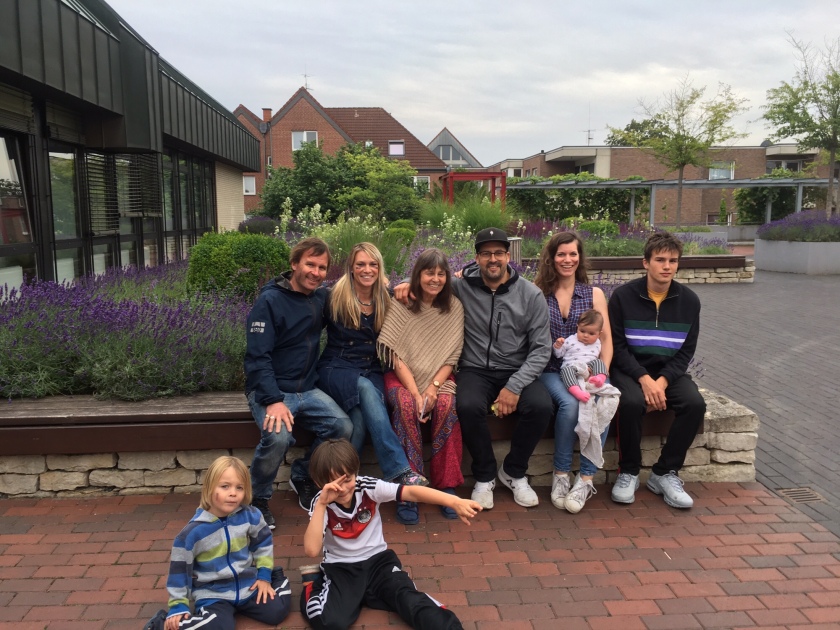 On my Mom’s real Birthday day, we drove to the Dümmer See and met with her best friend “twin” Hannelore. They are born within a few days in June. We had a long walk and got a bit wet at the end. But that did not matter. The captain enjoyed this place with all the boats too. And Mats flew his kite and we found a playground for him. 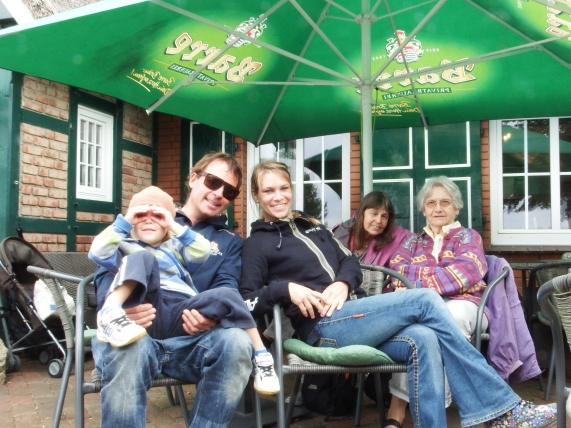 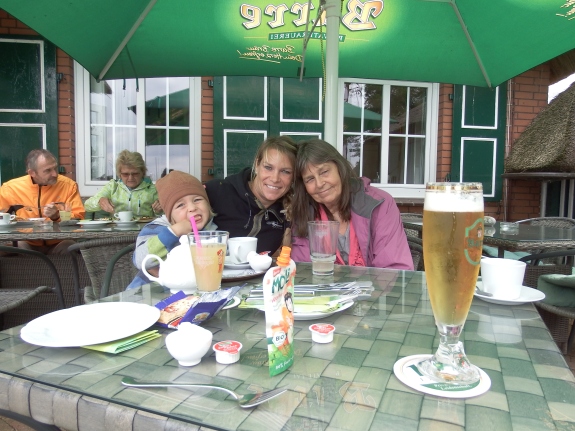 It was very hard for me to leave Enger and I had a heavy heart. Friends and my Mom so dear to me! Sorry I don’t have pics of all, but you know who you are! Love you! And sorry Mom, again!

The last 3 pics show a beach club “The Tikibar” in Bünde, which was introduced to us by my dear friend Claudia. 🙂 They opened a lot of those fun spots throughout Germany.